The Specialty Cellulose Pulp segment generated adjusted EBITDA of $3 million on sales of $105 million for the quarter ended March 2015, compared to adjusted EBITDA of $9 million on sales of $102 million in the prior quarter. The pulp sales increase of $7 million was due to higher shipments of both specialty and viscose grades. Weaker demand for specialty grades that began in the prior quarter continued into the first part of calendar 2015. As anticipated, US dollar and euro prices for specialty grades declined by approximately 7%-8% on January 1, 2015. Overall, Canadian dollar equivalent pricing for specialty grades declined by $105 per tonne, or approximately 6%, as a weaker Canadian dollar provided a partial offset on sales denominated in US dollars. US dollar prices for viscose grades were relatively unchanged. The $64 per tonne improvement was driven by currency as the Canadian dollar declined by 8.4% versus the US dollar. The viscose market remains oversupplied and prices are relatively low. Overall, lower prices reduced adjusted EBITDA by $3 million. Shipments were equal to 75% of capacity, compared to 63% in the December 2014 quarter. In addition to the previously noted market weakness, shipments in the December 2014 quarter were impacted by an 18-day production stoppage at the Temiscaming specialty pulp mill due to a labour dispute with the unionized workforce. The Temiscaming mill returned to normal operations in the March 2015 quarter and produced approximately 8,400 more tonnes than in the prior quarter. The Company also continued with the commissioning of the new boiler and turbine at the Temiscaming mill. Energy costs at the facility declined by $3 million quarter-over-quarter, of which approximately $2 million is related to the new boiler and turbine. However, most of the previously noted additional production and sales were for viscose and other grades, which generated an unfavourable mix variance, reducing adjusted EBITDA by $4 million.

The Forest Products segment generated adjusted EBITDA of $4 million on sales of $113 million for the quarter ended March 2015, compared to adjusted EBITDA of $7 million on sales of $115 million in the prior quarter. Sales decreased by $2 million due to lower shipments of SPF lumber, partially offset by the seasonal increase in third-party log sales. Lumber shipments were equal to 81% of capacity versus 88% in the prior quarter. During the March 2015 quarter, the random length lumber reference price decreased by US $25 per mbf while the reference price for stud lumber decreased by US $34 per mbf. Currency more than offset the US dollar price decline as the Canadian dollar averaged US $0.807, an 8.4% decline from US $0.881 in the prior quarter. The net effect was that Canadian dollar selling prices increased by approximately $6 per mbf, increasing adjusted EBITDA by $1 million. Sawmill manufacturing costs increased by $4 million. The winter months are normally higher operating cost periods due to the colder weather conditions and the March 2015 quarter was no exception.

The Paper Pulp segment generated adjusted EBITDA of $3 million on sales of $73 million for the quarter ended March 2015, compared to nil adjusted EBITDA on sales of $59 million in the prior quarter. The $14 million increase in sales was due to higher shipments and prices. The benchmark price (delivered China) for bleached eucalyptus kraft (BEK) increased by US $27 per tonne. However, the increase did not carry over into the high-yield paper pulp market and US dollar prices were similar quarter-over-quarter. Currency favourably impacted pricing as the Canadian dollar weakened versus the US dollar. Overall, average selling prices increased by $35 per tonne, increasing adjusted EBITDA by $4 million. Pulp shipments were equal to 81% of capacity as compared to 71% in the prior quarter. December 2014 quarter shipments were impacted by a 16-day production stoppage at the Temiscaming high-yield pulp mill due to a labour dispute with the unionized workforce. In the March 2015 quarter, the two pulp mills produced 14,300 tonnes more as compared to the prior quarter. Manufacturing costs were relatively unchanged, with the benefits of the higher productivity offset by increases for labour, energy and fibre.

The Paper segment generated adjusted EBITDA of $8 million on sales of $84 million for the quarter ended March 2015, compared to adjusted EBITDA of $8 million on sales of $76 million in the prior quarter. Higher shipments combined with improved prices for coated bleached board led to the $8 million increase in sales. The coated bleached board market was stable. Currency favourably impacted pricing as the Canadian dollar was weaker. Overall, average selling prices for bleached board were up $135 per tonne increasing adjusted EBITDA by $5 million. The coated bleached board shipment to capacity ratio was 82% compared to 80% in the prior quarter. Manufacturing costs increased by $3 million, primarily for purchased pulp and energy. The newsprint market remained weak with continued decreases in North American demand. The US dollar benchmark price for newsprint declined by $20 per tonne. The previously noted decline in the relative value of the Canadian dollar more than offset this decrease and prices in Canadian dollars increased by $10 per tonne, increasing adjusted EBITDA by $1 million. Manufacturing costs at the Kapuskasing newsprint mill increased by $4 million, primarily for electrical energy.

The Company had previously indicated that the total construction cost of the Temiscaming Cogen project would be approximately $273 million. As of the end of March 2015, the total construction cost had reached $272 million. Commissioning of the turbine began in early January 2015, at which time the Company generated its first electricity sales. In late January, the Company successfully met the “commercial-in-service” test set forth in the power purchase agreement with the public utility and began selling electricity at the higher “green” power rate. During the month of February 2015, the Company began the firing of pulp mill residual liquor in the new boiler. A significant amount of effort and resources were dedicated to ramping up the volume of liquor burned and optimizing the exhaust gas scrubber system and related equipment. The commissioning work occurred during a period of very cold temperatures and necessitated the purchase of a significant volume of natural gas, which offset the energy cost benefit of firing the liquor in the month of February. During the month of March, boiler, scrubber and turbine operating efficiency continued to improve, approaching targeted levels of performance and providing a net energy cost benefit of $2 million in the month. Based on boiler and turbine operations to date, the Company is confident it will attain the $28 million of projected annual energy benefits. The Company has also set a target of $7 million per year in operating and maintenance cost reductions, or $1.75 million per quarter. During the March 2015 quarter, the Company continued to periodically operate the old boilers and was required to maintain them on operational readiness when not in operation. As such, the Company estimates that very little of the projected operating and maintenance savings were realized in the March 2015 quarter. The ability to take the older boilers permanently “offline” will dictate the timing of these savings. Finally, the Company has guided for a potential $13 million per year productivity and margin enhancement associated with the production increase of 15,000 tonnes of specialty pulp. While the previously noted energy and cost benefits are near term items, the productivity and margin enhancement benefit will be dependent on the Company’s ability to generate additional specialty pulp sales volumes, which may require an extended period of time.

Overall, the March 2015 quarterly results were lower than anticipated. The seasonal impact of the colder winter operating conditions on productivity and energy costs was more significant than expected. As well, the positive impact of a weaker Canadian dollar versus the US currency was mitigated by lower US dollar prices for lumber and paper products. As expected, the Specialty Cellulose segment results were negatively impacted by lower US dollar and euro prices for specialty grades, which declined by approximately 7%-8% on January 1, 2015. While shipments improved from the prior quarter, they remained relatively low. It is not anticipated that demand for specialty grades of cellulose will improve in calendar 2015, which will likely lead to increased production and sales of viscose and other grades. The viscose grade market is also not expected to improve. The over-supply situation will likely persist throughout 2015. As noted previously, while the Forest Products segment did experience its normal seasonal increase in operating costs, the expected seasonal increase in US dollar lumber prices did not occur. The Company anticipates that the gradual recovery in US housing starts will support higher demand and prices in future periods. Lower costs and a relatively low Canadian dollar should also contribute to higher profitability in the spring and summer months. The Paper Pulp segment results improved, but remained relatively weak in terms of adjusted EBITDA. The new South American hardwood paper pulp capacity is impacting prices and we anticipate marginal profitability from this segment until the market absorbs all of this new capacity. The Paper segment results were relatively unchanged. The coated bleached board markets remain stable and the business should continue to generate good results, bolstered by a relatively weaker Canadian dollar. Ongoing weakness in newsprint markets has put downward pressure on prices and this situation will likely persist in the coming quarters. Here again, Canadian producers are benefitting from the decrease in the relative value of the Canadian dollar versus the US dollar. 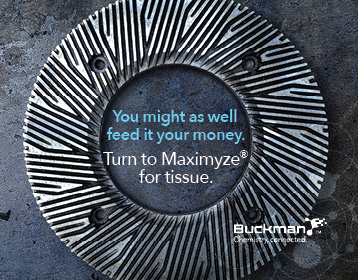