A tissue felt must be a concentration of textile, mechanical, hydraulic and hydrodynamic technology. It must support the sheet which must adhere closely to the felt, it must be transported from the forming zone to the vacuum zone to the pressing area, firmly held and then released without uncertainties when it reaches the yankee cylinder.

Tissue felts cannot bear any irregularity, nor any defect. Even just one fiber sticking out from the felts surface is enough to impair the quality of paper produced. So, if for traditional paper types we can use “rather simple” felts, for tissue paper instead, exceptional products are required that only few producers in the world can manufacture.

At Binet Sul Liri S.p.A., research and development are a meticulous constant and the challenge represented by felts for tissue machines is a primary concern. Therefore we have developed a number of specific technical tools either for felt designing: FELT ENGINEERING. Than for technology evolution: SOFT-TOP and TWIN-TOP, and also for prototype trial testing – FELT TEST. Here are a few notes on these topics.

It’s an exclusive software created, tested and now daily used by Binet sul Liri for designing of its felts. It is able to calculate all of the most important technical characteristics of the felt using equations deriving from physics of porous means, for example:

Advantages: evaluation, during design phase, of all technical characteristics of the felt to be produced and of all the possible implications deriving from every adjustment made. This way, often, a first felt supplied can perform better than standard ones.

The alternative: use of felts designed by similarity of position and production and eventually adjusted through following supplies. Commercial standard felts can give an acceptable efficiency and life-time when well designed and produced, FELT ENGINEERING guarantees optimization of machine clothing. Like all other components of the paper machine, felts can be designed and produced using engineered methods instead of being produced empirically as done till today. This is the only way to optimise product’s performance and moreover the efficiency of the press. In fact a conventional felt can result to be a good felt when it is well designed, but it’s unlikely to be the best felt achievable, as like a Binet felt!

One of the main problems in the tissue field is represented by the necessity to generate a very fine and dense paper side surface on the felt with the purpose to achieve: an excellent pick-up and holding of the sheet; filtration of the filling materials; high dryness; low re-wetting. To reach such goals, usually fine fibres and an intense needling are applied.

At Binet Sul Liri, research and development are a meticulous constant

The inconvenience of such procedures consist in the transportation of the fine fibres through the structure of the felt, producing a densification of also the internal layers, causing air and water permeability reduction. Consequently felts can become difficult to condition and to keep clean.

The system planned by Binet Sul Liri consists in the dissociation of the paper side functions with those of the rest of the felt: the paper side is built as a very light and perfectly consolidated baseless felt, meanwhile the complex of the base fabrics and of the internal batts trace the typology of a standard felt. 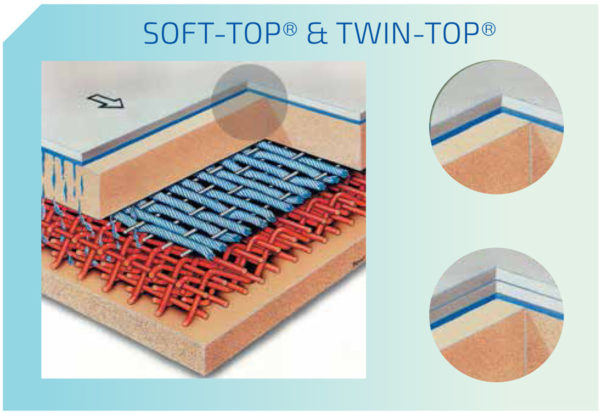 The two manufactured products are then assembled by means of particular procedures in order to maintain a very fine and dense surface along with a relatively open and permeable internal structure. To describe it synthetically and efficiently, we likely named this baseless structure “SOFT TOP®”.

Our tissue felts have gained so much from such application that in the majority of the cases they result to be of better-quality in comparison to the standard. Recently we have subsequently developed the concept by applying two light SOFT TOP structures instead of only one heavy structure, thus achieving other incredible advantages such as: highest speeds; reduced energy consumptions; production flexibility; extreme cleanliness of the felt and of the fabric in particular on Crescent Former machines; up to 50% more lifetime than the standard; extreme regularity of the profiles.

Such innovation, identified as “TWINTOP®”, seems to be the most interesting development of the tissue felt technology on the market at the moment. “SOFT-TOP®” and “TWIN-TOP®” are trade-marks by Binet Sul Liri and are exclusive applications of our firm.

It is the squaring of the circle. It is a guiding system that allows you to test on a real sample designed on the basis of the customer’s requirements, the ability of the felt to:
» quick start-up;
» give the required amount of water to the vacuuming elements and to the NIP at the required speeds and with the available air flow;
» monitor evolution over time in terms of thickness, permeability and also water handling.

A full test of a sample measuring 8,0 m x 0,5 m, takes up to two weeks’ time and simulates a number of NIPs on the actual machine equal to 60-65 working days. Longer time may be necessary for special requirements. Measurements are taken once per hour on the first day to simulate the start-up, then once daily on the subsequent days corresponding to a once a week survey on the real machine.

Thanks to these particular computer and technology tools, Binet Sul Liri is a candidate to be the most powerful supplier of tissue felts of the third millennium. Our developments and our conclusions are available to all manufacturers of paper machines and all paper producers in order to enhance and improve their productions and their technology.

Meet your next bussiness partner