Creping… the Heart of Tissue

Tissue is a unique paper product. We all know very well and that cannot be mistaken with any other paper grade thanks to its softness and bulkiness.

Strange as it may sound its manufacturing process is almost identical to those used to produce the other types of paper: tissue contains the same fibers, it undergoes the same treatment and it contains many of the same chemical additives. It is formed on similar fabrics, pressed and dried in similar ways too.

CREPING is what sets it apart from all the other grades and this is why a better understanding and a correct set-up of the creping operation are crucial to the success of any tissue machine. The geometrical set-up of the creping blade against the Yankee Dryer (YD) is simple but very important when it comes to the structure of the tissue paper it will produce. 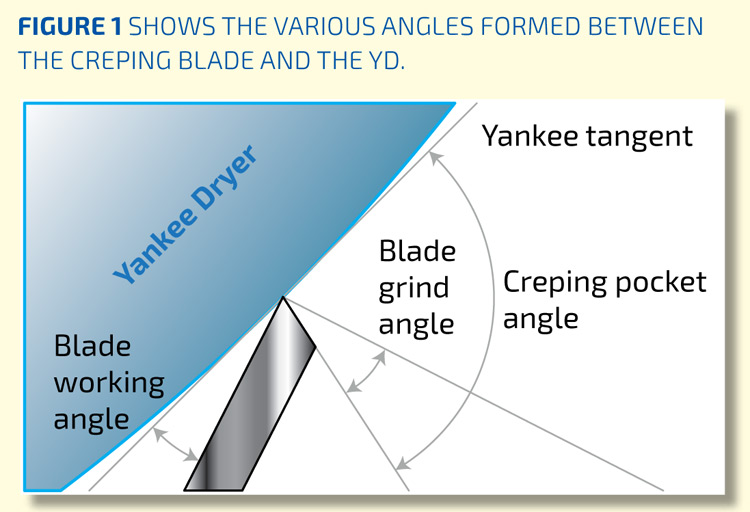 As a rule of thumb, a Creping Pocket Angle below 80 degrees will determine a coarser but more bulky tissue (Figure 2). 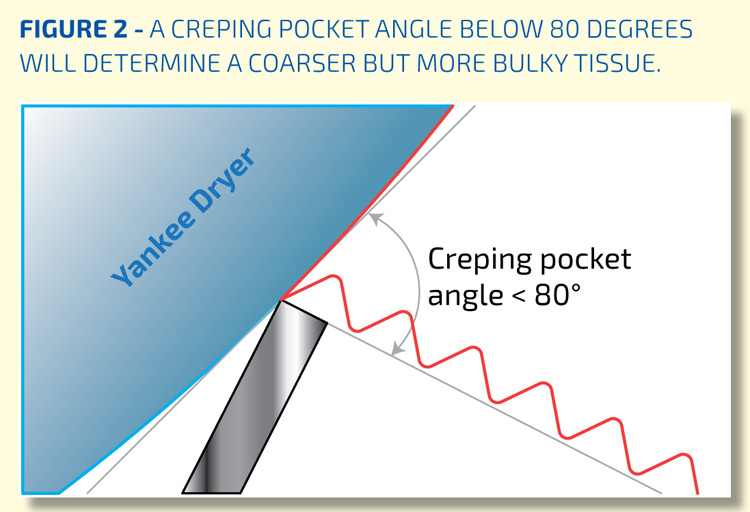 A Creping Pocket Angle above 80 degrees will determine a more fine but less bulky tissue (Figure 3). If we were to consider a Blade working Angle constant at 20 degrees, then a Blade Grind Angle of 10 degrees would represent the dividing value between a coarser and finer creping. 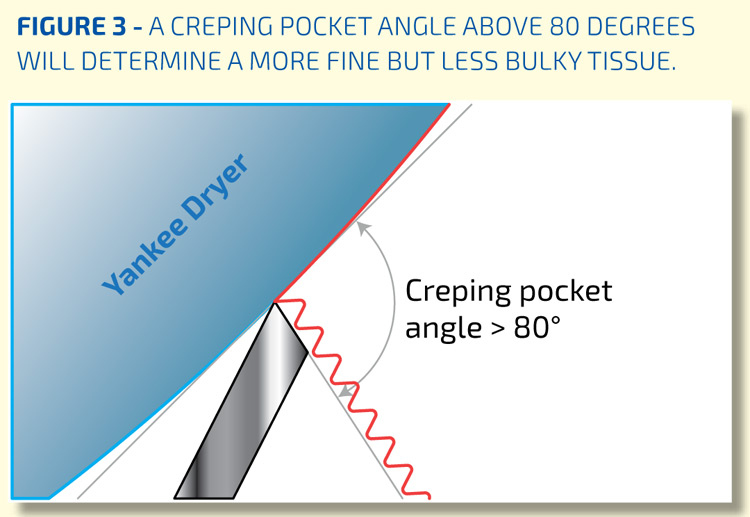 Different Blade Wear Angles will clearly affect this. Bonetti can boast a long experience in the supply of products for the creping application that dates back to the seventies: when it comes to its products Bonetti is right now one of the major suppliers to the tissue industry worldwide. Over the years we’ve helped numerous customers improve their creping process taking a comprehensive approach spanning from the blades to the doctoring equipment, them being both part of the current product portfolio.

The main areas where Bonetti focused its efforts have been the sheet quality improvement, the increase of the overall efficiency of the tissue machine and the reduction of its operating costs.

The approach is diversified and tailored to the specific demands of the customer and Bonetti have been therefore bringing to the industry new tools and new products. A good example of new tools is BONVIBES, Bonetti’s new Vibration Monitoring System (Figure 4 and Figure 5 at the top of this article).

This new system helps the tissue maker monitor the development of the vibrations of the creping doctor over the lifetime of the blade thus allowing the correct scheduling of the blade changes. This in return greatly reduces the risk of chatter marks on the YD surface and a better control of the coating distribution.

When it comes to new products the MIZAR (Chrome Oxide) and SIRIUS (Chrome Carbide) blades, when compared to a traditional carbon steel blades, extend the lifetime of the creping blade and greatly improve the softness of the tissue produced.

These two blade qualities complete each other: whereas the MIZAR offer the longest possible lifetime, the SIRIUS, while sacrificing a small amount of lifetime, allow for a smoother start-up, are not prone to chipping and can be machined with sharper angles suitable for Super Soft tissue grades (Figure 6). 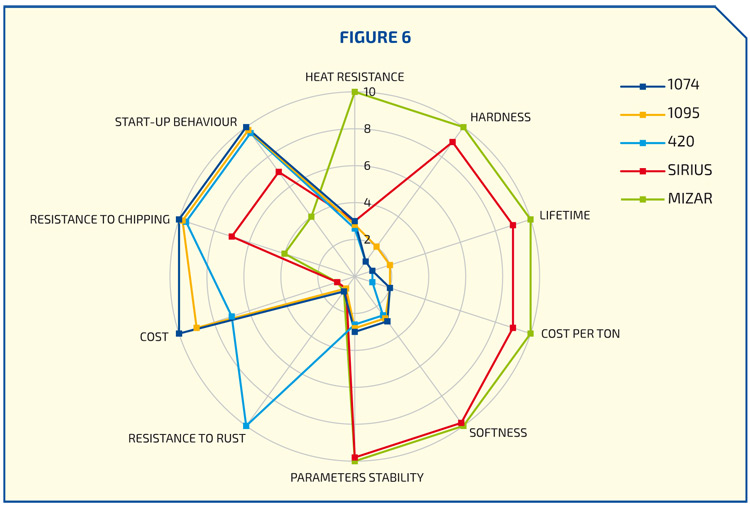 For those customers not willing or not yet ready to switch to tip coated blades, Bonetti have been promoting with success a move from the traditional “old style” multiple re-grinding of used carbon steel creping blades to the use of new blades only in the creping position.

The advantages coming from this philosophy far outweigh the extra cost associated to the higher number of new blades being used and have prompted several customers, even in those markets were the tradition of re-grinding the used blades is more entrenched, to switch.

In general, the use of new blades only in the creping position helps the stabilization of the YD coating and the achievement of more consistent sheet quality parameters since the blade geometry and finishing does not change from blade to blade. 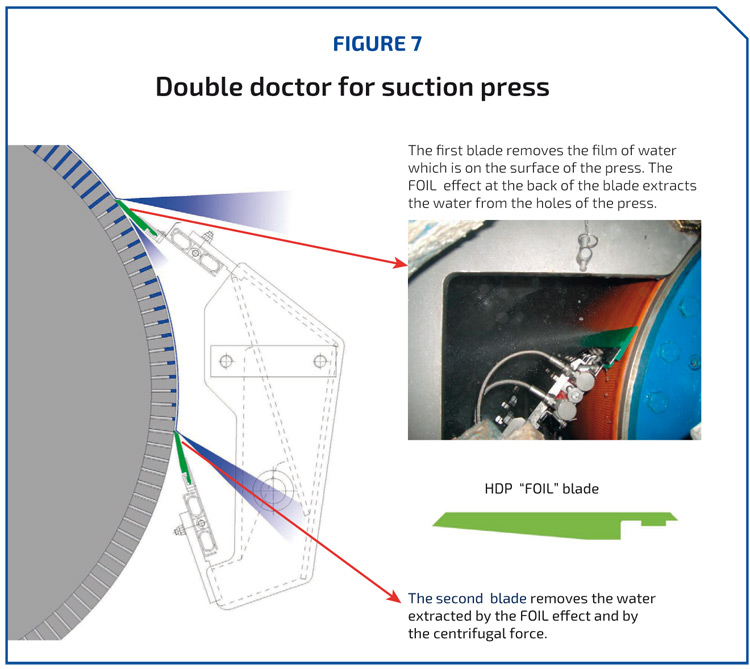 Finally the equipment: as one of the most established suppliers of doctor and creping equipment Bonetti know what are the needs of the market and is constantly working hard to find the right solution. One good example is the double doctoring system for the press roll of tissue machines. This system’s primary target is the removal of as much water as possible from the roll surface and from the holes drilled on it, whether blind drilled or connected to a suction. Major advantages coming from the installation of this equipment are a higher dryness content after the press and a more uniform humidity profile entering the YD. This technology is best practice in some of the biggest tissue groups in the world.