Consumer Tissue in Greater Europe. Saturation in the West vs Significant Unmet Potential in the East

Despite economic and political headwinds in a number of markets, the consumer tissue industry continues to expand globally. In 2016, retail tissue sales recorded positive growth worldwide, increasing in volume by 2% to reach 23 million tonnes.

Eastern Europe ranked third in terms of growth, after Asia Pacific and the MEA regions. In 2016, retail consumer tissue sales in Eastern Europe recorded a 4% volume increase. Lower levels of per capita consumption in the region, compared to North America and Western Europe, leave room for further household penetration and industry growth.

On the other hand, at a regional average of 8.7kg per capita, demand for tissue products in the majority of Western Europe is seeing only marginal growth, due to market saturation and slow population growth. The exception is found in Turkey (tracked by Euromonitor as part of Western Europe). However, the political instability that characterised the Turkish market throughout 2016 can be expected to seriously hamper the region’s ability to reach this potential in near future.

Until the onset of economic recession in 2014, consumer tissue in Russia demonstrated healthy volume growth in retail, outpacing the European average. Over 2011-2016, consumer tissue retail sales grew by an 8% volume CAGR, expanding by an additional 120,000 tonnes. Per capita consumption of retail tissue products went from 1.9kg in 2011 to 2.7kg in 2016, up by nearly 30%.

However, the pace of growth in 2014/2015 and in 2016 was only about half of that observed in the prior years, as the impact of economic and political struggles became increasingly difficult for Russian retail, with weakened consumer purchasing power restricting demand for consumer tissue.

Financial difficulties, however, have contributed to notable gains for private label tissue. While private label has led retail tissue in Western Europe for a long time, in Eastern Europe the concept of private label is relatively new. The expansion has been further supported by the rise of modern retail chains and investments by the leading retailers like Magnit and others into product production, supply and development. The latter trend has also led to growing consumer trust in the quality of private label products. 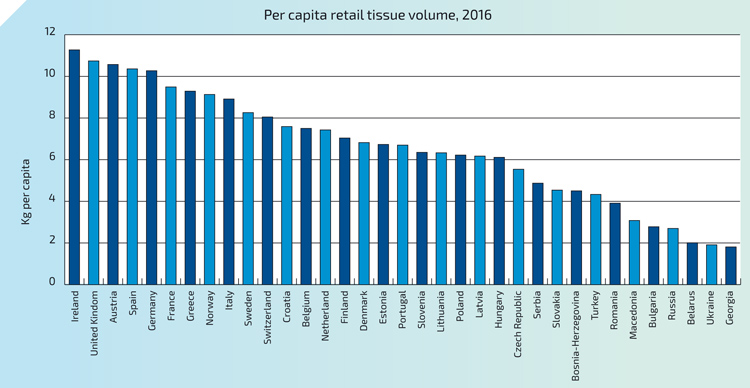 This behaviour has developed in large part as a reaction to a fierce price war among British grocery retailers. Initiated during the 2008/2009 financial crisis, the size and frequency of the discounts offered on tissue products peaked in 2014, as branded players brought unit prices almost to parity with private label. It has to be said, however, that as players have been reducing the depth of the price cuts they are still able to trigger spikes in sales. As a result, some brands saw success maintaining or increasing the frequency of discounting while backing off from the size and depth of actual price cuts. 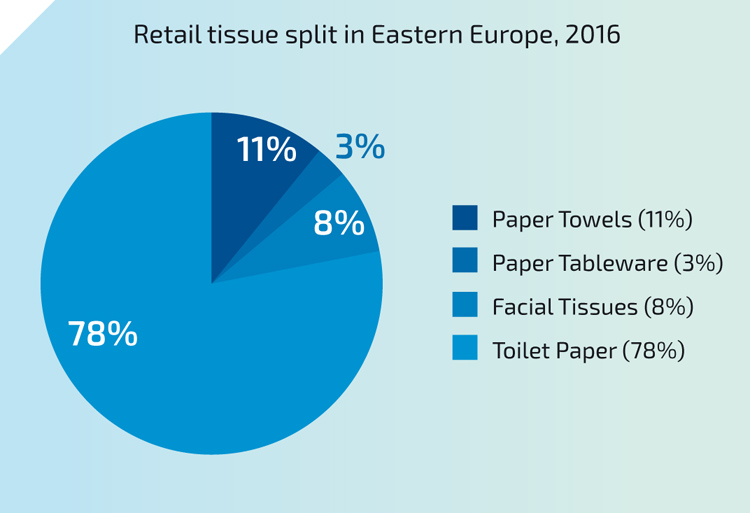 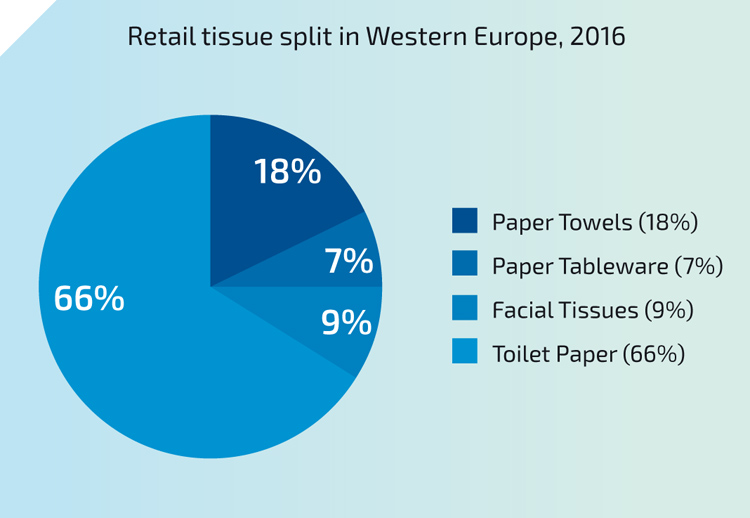 Cocooning, convenience, and innovation support growth of paper towels, which recorded positive growth in both Eastern and Western Europe, at 6% and 2% CAGR in retail volume over 2011-2016, respectively. Similarly to overall tissue, 2014, 2015 and 2016 saw a slowdown in sales of paper towels in Eastern Europe, due to economic downturn. However, on the whole the category is maintaining a positive trajectory.

Facial tissue and paper tableware are trailing behind in volume terms. These are also often hit harder during economic crises and are see more as a discretionary purchase, which can be substituted or skipped altogether while budgets are tight.

The Euromonitor International Forecast Model indicates strong, as yet unrealised potential in Eastern Europe retail tissue; potentially as much as 1.5 million tonnes. In contrast, over a third of unmet potential in Western Europe is due to low penetration in Turkey.

Improving socioeconomic conditions and habit persistence are anticipated to be key drivers of future retail tissue growth in Eastern Europe, also supported by further product development in both private label and branded value-added products. Excluding the threat of major economic or political upheaval, the rivalry amongst brands and private label will continue to dominate the competitive landscape of retail tissue in Western Europe. A general recovery in the leading national economies will likely encourage consumers to be more receptive to value-added innovation.

Nevertheless, many successful innovators are not likely to see high returns on their investments as high saturation across most markets sees rivals, particularly within private label, eager to adopt successful innovation and undercut the originator in order to gain share.